As I mentioned on the Home Page, horizontal separation between voice coil gaps for ferrite magnet Altec Lansing 604 & 904 duplexes is 2.8125”. This distance produces 112 degrees of phase shift between the driver’s acoustic centers at 1500Hz. The Altec supplied passive crossovers for most of these units were essentially the same as for the ALNICO 604-8H, namely third order high pass and second order low pass sections at 1500Hz with MF and HF EQ circuitry. Might there be a better circuit to phase correct ferrite motor Altec Duplexes than the 8H filter? A good question – and in late 2006 I  got my chance to find out when a pair of Altec 604-16X Studio Monitors came my way. Altec did not sell a passive crossover with the 604-16X, so I decided to explore what would constitute a usable filter for them.

The 604-16X and 604-168X duplex loudspeakers were among the first Altec ferrite magnet 604s and were in production around 1983. The 604-8K and 904-8A models were also produced during this time. They all shared the 16” die-cast aluminum frame, Mantaray constant directivity horn and Tangerine phase plug. The 16X and 168X were identical except for low frequency impedance – the 16X used16 ohms, the 168X used 8, but both used 16 ohm impedance high frequency sections. Neither of the Xs was supplied with a crossover, as they were intended for biamplification with an electronic crossover at 1500Hz, or above, using 18dB per octave slopes.

The table below shows a goodly number of 1500Hz centered filters I initially considered for correcting the 604-16X/168X phase shift. None of them corrected it to zero, but some were very close.  I modeled these filters in CALSOD using drivers with constant impedance and SPL, but with their HF acoustic center placed 2.8125 inches behind their LF center.  I only included filters that produced a positive SPL error at crossover of 2.1dB or less.

CLIO and The Real World

I subsequently measured the SPL and impedance magnitude of both 604-16X drivers using the CLIOwin’s MLS Impulse technique. The measurements were made 4’ on-axis with a 5ms rectangular window used for the FFT conversion from time to frequency domain information.

Below is the CALSOD model of combined driver & crossover.

After examining the data closely, it appeared that most of the filters listed in the Contenders Chart above simply would not work due to a 5dB dip in the woofer’s output near 1500Hz combined with a falling compression driver horn output below 2100Hz. There was simply not enough combined output at 1500Hz to support anything close to a flat response in the crossover region. These drivers must have produced a huge hole in the mid frequencies when end users followed Altec’s 18dB/octave at 1500Hz recommendation! EQ boost anyone???

The only solution seemed to be a low order filter with a wide “spread” of corner frequencies to minimize the depressed region’s contribution around 1500Hz. CALSOD modeling of the Contenders, using CLIO imported data from the drivers, quickly verified this, and showed that a second order Butterworth centered at 1650Hz with a 30% frequency spread was a more successful solution. This configuration fixes the -3dB points of the filter at 1269Hz for the LP and 2145Hz for the HP. And while the move to 1650Hz for the crossover point increased the phase shift between sections from 112 to 123 degrees, it only increased the crossover error by .1dB. In fact, the total phase error between drivers at 1650Hz is 6°.

In reviewing the CLIO plots further I also noted that the compression driver had a +3dB hump at 2900Hz, as well as falling HF response above 6kHz. To deal with these items a parallel trap circuit would probably be needed to reduce the hump, as well as a contour circuit to partially correct for the constant directivity horn’s falling on-axis output.

The schematic for the circuit is shown below. 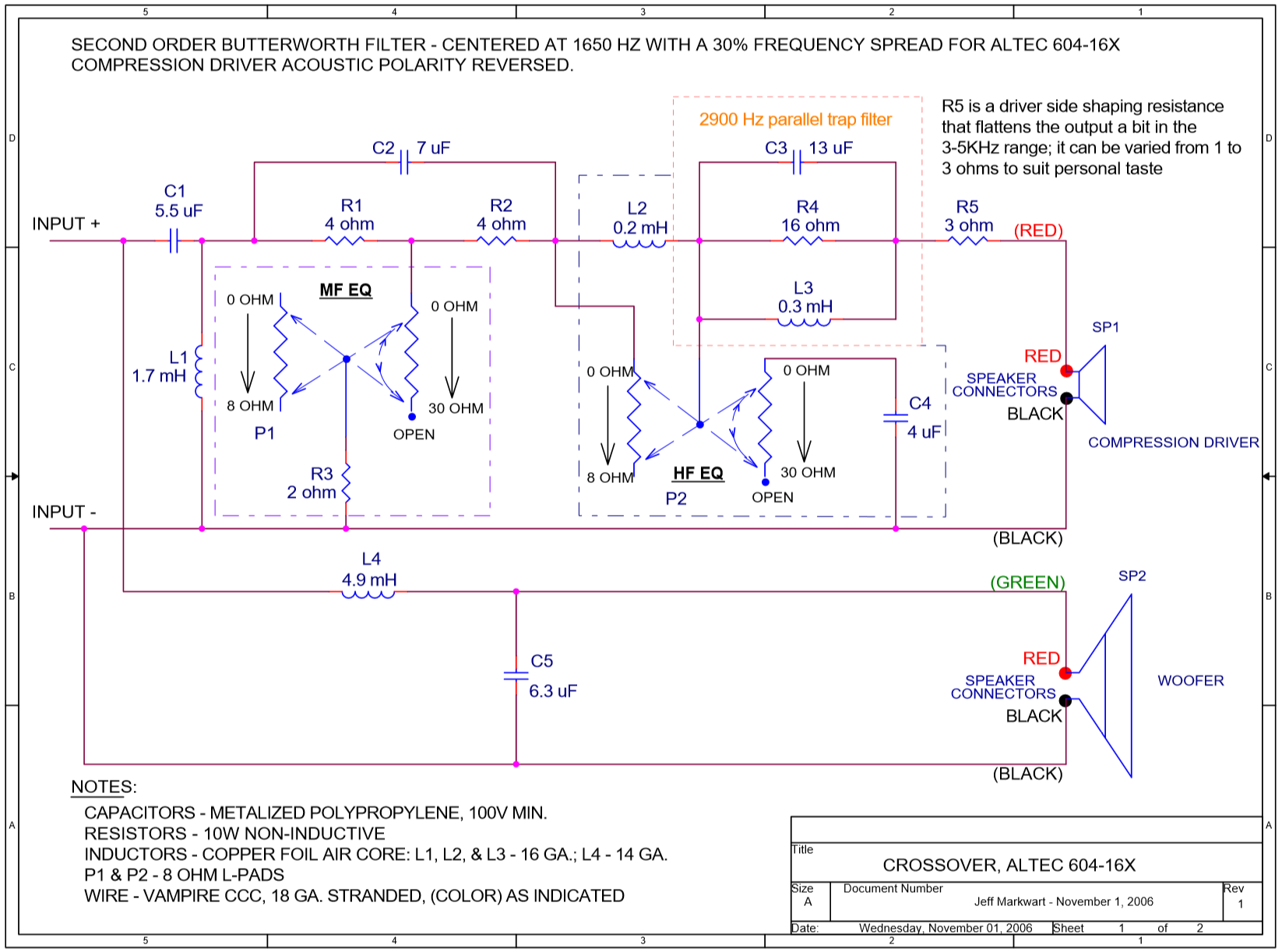 The finished circuit uses individual 8 ohm L-pads for adjustment of Mid Frequency (MF) and High Frequency (HF) output. At the standard settings for flat response (mid point on MF; 90% CW on HF) the minimum input impedance seen by the amplifier will be around 17 ohms from 10-20kHz. If you turn the MF control full CCW, or the MF and HF controls full CCW together, the minimum impedance will drop to about 10-11 ohms from 18-20kHz. Also included is a simplified version without MF and HF controls.

Below is feedback I received in early 2007 from a builder of my Altec Lansing 604-16X Phase Correct Crossover. While he chose to implement the version without MF and HF EQ controls, he was very pleased with the result.

“I don’t know how to explain it, but first of all, the results are beyond my expectations. I’m using a Pioneer Elite receiver with the calibration mic. The automated setup went from +/- 6 dB (250Hz to 11.3KHz) with old crossover (604E) to +/- 1 dB. That seemed pretty impressive to me, but the ‘clarity’ and what seems to be ‘lack of smear’ are absolutely amazing.

We all love the 604-16xs with the new crossovers!!! I sat and listened to one CD after another and was amazed at the things I heard that were masked before. Being a piano and organ player, I was able to sit and listen to piano passages and music with a new appreciation of the recording engineer’s abilities.

There was an interesting phenomenon in listening to the new set up. I used to like to turn the music up (loud) in order to really get the ‘feel’ of it. With the crossovers, it doesn’t add anything to turn it up. We listen to music at much lower levels than before, with much greater clarity. I like listening to ‘Leap of Faith’ because of my affinity to gospel music – with the new crossovers the words are very intelligible, whereas before I just thought the singers were not enunciating well.

Classical music is great. Good and poor recordings are now very easy to tell apart – where it’s more difficult to listen to poor recordings now. We have gone to listening to most everything using the direct mode on the receiver, without any added EQ or subwoofer. No other special processing, that is available on the Elite, is required. All of our TV watching is just using the two Altec 604-16Xs, with much reduced volume levels and enhanced clarity.

Overall, the project has been highly successful from my perspective. Thanks for taking on the crossover challenge.”