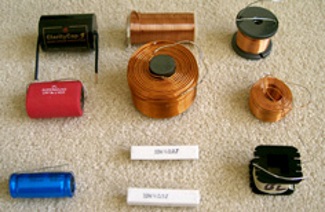 The parts and bi-wiring layout I have specified  here for building my various 604 and 605 phase correct crossovers are ones I have used successfully with vintage Altec Lansing drivers in the past. The parts are not inexpensive, nor the layout quick to implement, and for good reason – they sound better! I’ve received a number of questions from prospective builders about part substitutions and construction techniques, so I thought it would be a good idea to present a few thoughts on the subject for your consideration.

My circuits specify Hovland Musicaps. Hovlands are truly premium items, and are available from Michael Percy Audio (www.percyaudio.com) and SonicFrontiers (www.partsconnection.com). There are two other brands available at lower cost I can also recommend, Auricap and Kimber Kap. Auricap is the successor to Sidereal, one of my all-time favorites. Both of these caps are of metallized polypropylene construction, and are sonically very transparent. Check with Michael Percy and SonicFrontiers for Auricap; Parts Express (www.partsexpress.com) for Kimber Kap.  There may be other vendors.

Some builders prefer paper-in-oil capacitors (PIO) which are similar to what Altec origionally supplied in their crossovers. I don’t have specific recommendations, as I prefer polypropylene types, but PIOs are worth considering. PIO caps can be sourced from most of the suppliers listed here. The following is a testimonial from a builder who substituted PIO crossover capacitors for use with his single-ended triode amplifiers:

“If there is anything that I could say made a profound improvement in the sound of your crossover, it would be the use of vintage PIO caps. I was able to get Erie 6uf, Sprague Vitamin Q 12uf, and Aerovox 25uf caps (all NOS except the Aerovox were barely used). After a few weeks of burn in, the sound is more involving than anything I have ever owned. The balance, subtlety, decay, and midrange to die for is there, and with no loss of the HF information I was experiencing before. If you haven’t experimented with these caps in your crossovers you really should. If you have, and still prefer the film caps, I can only conclude that ther is a wider spectrum of personal taste and system synergy than I would’ve guessed.” – Bob E.

The Copper Foil Air Core (CFAC) inductor represents the absolute pinnacle of audio inductor performance, but I understand that the Solo brand I specified may be discontinued.  There are two other brands however that should fill the bill, Alpha-Core and Jantzen. Alpha-Core is available from Michael Percy and SonicFrontiers; Jantzen from Parts Express.  If you substitute non-CFACs, be sure to keep the inductor DCR less that 10% of the woofer voice coil DCR (<1.2 ohm) and/or less than 5% of load impedance at the crossover frequency (<1.1 ohms), and the circuit should work OK.

I don’t really have a satisfactory substitute for Vampire Continuous Cast Copper wire. Developed for the Japanese Super Conductor program, it boasts huge crystal lengths (160M) that present a dead-quiet background when used on Altec horn systems. Michael Percy has CCC available for $1.00/foot. Easy to strip and solder, very flexible, plus an uncolored presentation. My favorite.

For the 604B I specified bi-wiring from the speaker input terminals to the drivers in order to push the mixing of driver ground currents as far back toward the amplifier as possible. This technique is optional.

If a 25 or 30 ohm potentiometer is hard to find, one-half of an 8 or 16 ohm L-Pad can be substituted by utilizing the 30 ohm element with the center wiper, and leaving the other element un-terminated. Most L-Pads also switch to open circuit after reaching the 30 ohm limit, which would effectively give you an added zero dB attenuation position for the Mid Freq EQ.

The newer diaphragm/voice coil assembly is easily distinguished from its predecessor by noting if the lead-in wires underneath the rear cover use push-on connectors at the diaphragm mounting ring, or the older screw-down type connectors. To check your connectors, remove the three screws that secure the compression driver rear cover to the top plate, lift the cover slightly and note the type of diaphragm assembly connectors used. 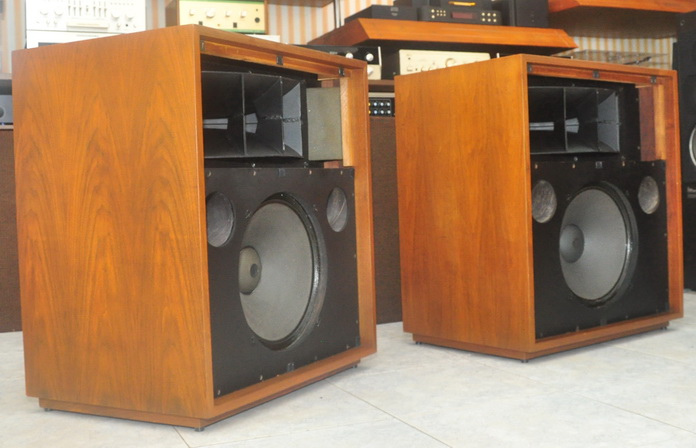 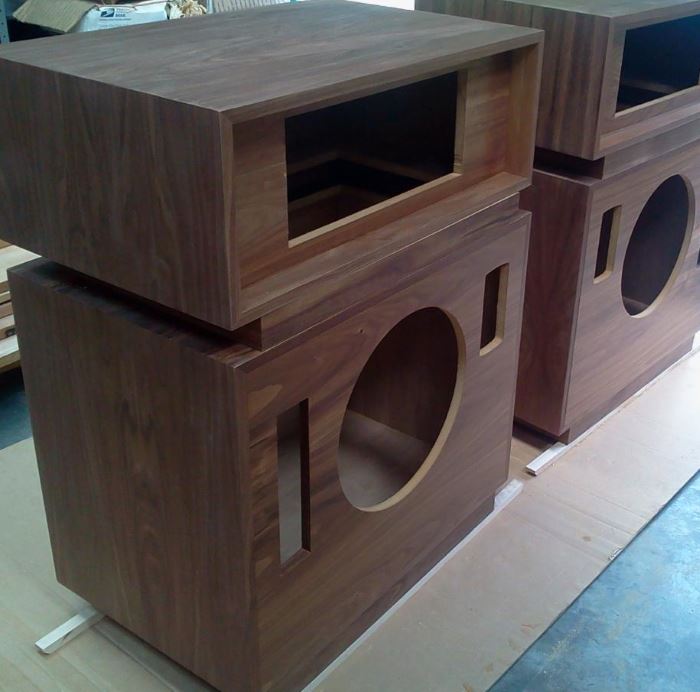